Right now, the global mobile app market is booming. It was valued at about $154 billion in 2019. By 2026, it is expected to grow to more than $400 billion. Many businesses want to take advantage of this boom with mobile app monetization.

This makes sense. Especially due to the pandemic, people have been turning to apps to work, play, and connect like never before. More people want apps. More businesses want to profit off this trend.

Let’s take a look at the mobile app market and how you can monetize your app.

The Importance of Mobile App Monetization

The mobile app market is booming, but it is also highly competitive. While it’s estimated that the average US adult spends hours on apps each and every day, they actually do not use most of the apps on their phone.

Creating an app is not cheap. On average, the cost of developing and launching an app is about $270,000. However, it is important to note that this varies widely according to the agency you work with and the complexity of the app that you need.

Keeping in mind the costs, the majority of apps that are launched do not reach 1000 downloads. This is why it’s so critical to launch an app as part of a strategy, which includes mobile app monetization. As you can see below, apps across types struggle with long-term user retention. 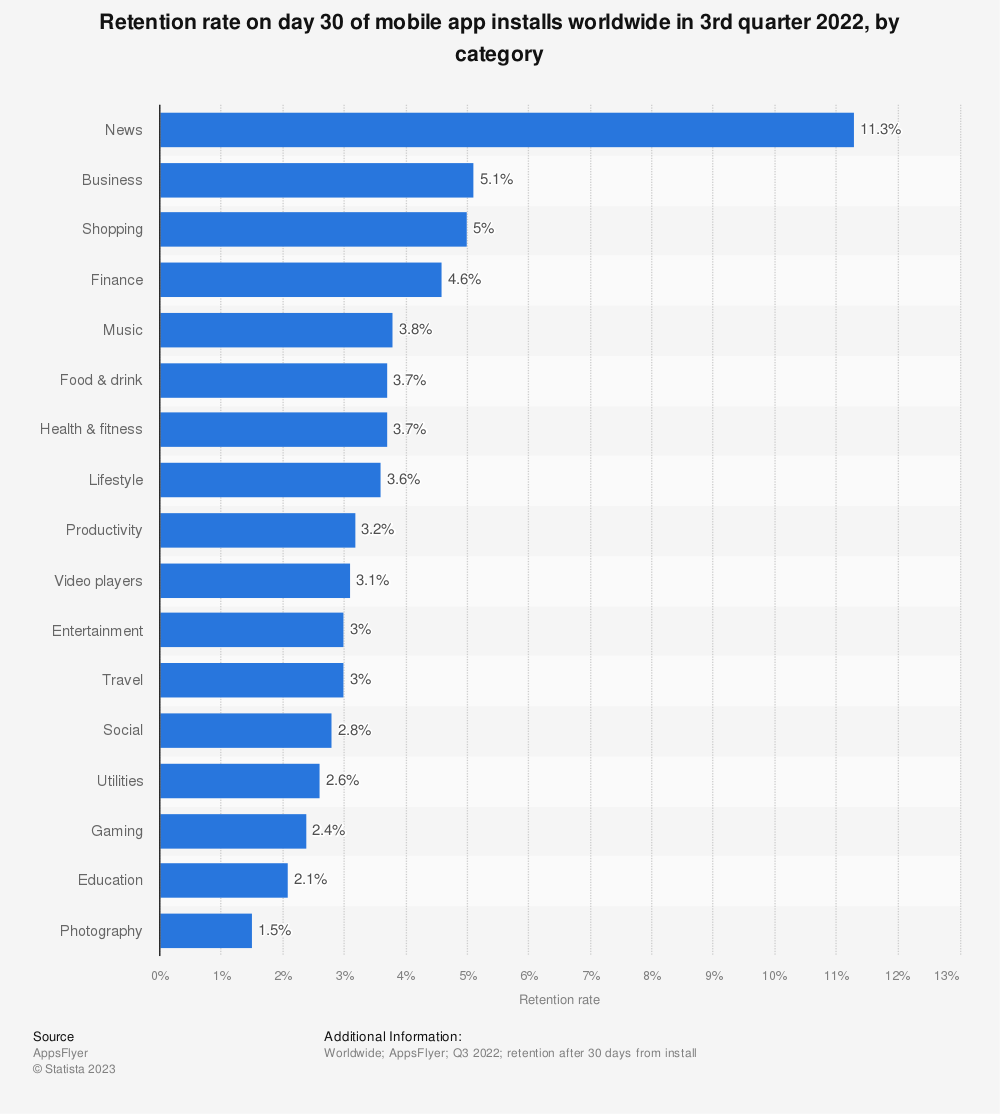 If you run a startup, and you are planning to pitch your mobile app to investors, having a monetization plan in place will give them confidence in your venture.

Let’s explore some ways you can make a return from your investment.

App stores, technology, and consumers are changing all the time. If you want your app to succeed, it’s critical that you keep this in mind as you explore different channels which can drive revenue.

The most common and obvious ways of mobile app monetization are through in-app purchases or by using a pay-to-download model. However, there are actually many other ways that you can monetize your app.

One way that’s picking up steam is subscriptions. This benefits developers because it allows them to earn a steady recurring monthly income from their apps.

Some other developers want to keep their apps free for users, but still monetize them. This is where in-app ads and the “freemium” model come in. Freemium apps offer a free tier to users, with options to pay for more features, premium versions, or a subscription.

When your app has a large enough user base, you may want to investigate sponsorship opportunities. Often, these will be displayed on a splash screen when the app is opened.

Which Monetization Path Is Right For You?

How you can monetize your app largely depends on what it does. For example, if your app is a mobile marketplace, you can charge service fees.

Some apps even accept donations. If your app is based on a brand with a loyal audience, you may want to sell them t-shirts or other merchandise.

Some apps even allow users to pay to turn off ads within them. If your app is a mobile game, for example, this is something to explore. Here are the main ways businesses are monetizing apps in the US. 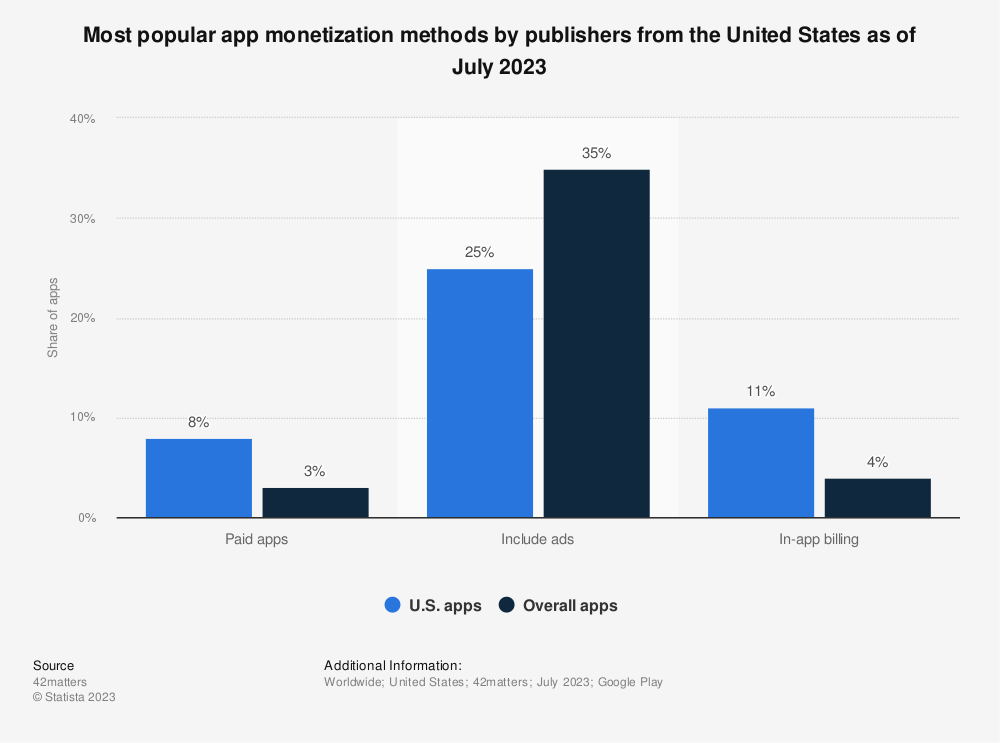 The Main Types Of In-App Purchases

There are three main types of in-app purchases: Consumable, Non-consumable, and Feature Subscription.

Consumable in-app purchases include things like in-app currency, items, lives, and other content that can be used up and repurchased many times. For example, in Candy Crush Saga, users can buy gems to spend.

Non-consumable premium content is purchased or unlocked once, and can be used throughout the entire user lifetime.

Depending on the type of app, this might include things like character skins, outfits, photo filters, or other upgrades. For example, the smash-hit game Fortnite allows users to buy character skins.

Feature subscription allows users to subscribe to specific features of an app. This could be a daily or weekly delivery of valuable items, for example.

Header bidding enables customers to collect bids from multiple demand sources at once. This has been in beta for years and early adopters are already starting to see the benefits of it.

According to Debra Fleenor, president of Adapex:

“Header bidding for mobile apps is getting sophisticated and actionable, after some time in beta. At a fundamental level, header bidding simply increases competition for your inventory which increases the revenue you earn for the same inventory.”

Essentially, pursuing header bidding lowers the costs of fulfilling your ad inventory. On top of this, it boosts your revenue.

Think About What Your Advertisers Want

Marketing your ad inventory’s value proposition is critical. Your advertisers will be able to understand the important parameters to their campaigns. This includes things like the demographic and geographical information of your users.

To boost your chances, state your parameters clearly in your ad request. Also, you want to make it as easy as possible for advertisers to track the viewability of your ads.

This will give them a full picture of how the ads are impacting their business. You can do this by using an Open Measurement SDK.

It is also very important that whatever solution you choose is taking steps to combat ad fraud. According to Fleenor, the best option is to prioritize first-party data.

“We’re embarking on a cookie-less future, which means the ability to personalize ads based on key data is at risk if you’re not affiliating with partners that are taking first-party data seriously.”

Before you launch your app or pitch it to investors, you should know how you want to monetize it. This will be a critical part of its success.

Now, which method is right for you? It depends largely on what kind of app you will create. It also depends on how large of an audience it has and who is using it.

Also, keep in mind, that you can pick multiple monetization methods. For example, it is quite common to see an app use in-app ads on its free version, but also provide a subscription-based ad-free version. Spotify is a great example of this.

What do you think? What methods of monetization do your favorite apps use? Comment below!

Building A Successful App Is More Than Skin Deep