March is Women’s History Month! In honor of that, we want to explore influential apps created by women. You may not have even known that brilliant women are behind some of these major global players.

Despite a history of influential work in tech going back about two centuries, many women still face significant barriers in tech today.

Let’s take a look at the history, the modern landscape of the tech industry, and some groundbreaking apps and companies created by women!

Women Have Always Been In Tech

While tech is a male-dominated industry today, women have contributed a lot to it. Many consider Ada Lovelace to be the world’s first computer programmer. She was born in 1815.

She was the daughter of Romantic Poet Lord Byron, and her notes helped Alan Turing develop the world’s first computer in the 1940s. Lovelace was born over a century before Turing did his work.

Despite playing key roles in tech for over two hundred years, such as being human computers for NASA its early days, statistics show that women, and especially non-white women, struggle to get hired by tech companies and find funding for their startups and apps.

While research from Deloitte shows that there are more women in tech every year, the improvement is slow. 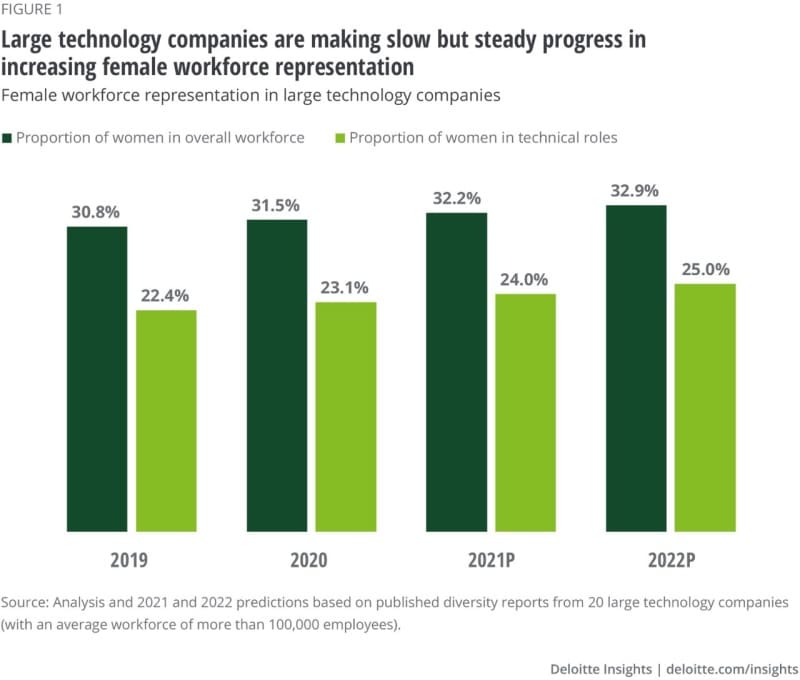 The CBC reports that VC is largely controlled by men, who overwhelmingly choose to only give funding to other men:

While billions of dollars in global venture capital funds were doled out in 2020, female founders received just 2.3 per cent of the pot, according to Crunchbase.

According to Kim de Laat, a postdoctoral research fellow in the Department of Sociology at Brock University, some women founders are outright denied funding based on how male venture capitalists assess their looks.

One woman was called a “momprenuer” and dismissed because the investor couldn’t see her as a business person.

As part of her studies into how women entrepreneurs are funded, de Laat spoke with a number of women who shared their experiences, including one who said a venture capitalist told her “she looked like she might be getting married soon and be popping out a couple of kids,” and he wasn’t interested in investing in a mompreneur.

Despite all of the obstacles, these apps created by women have thrived.

I bet you didn’t know that Eventbrite was woman-founded! This self-service ticketing platform was co-founded by Julia Hartz. Today, it serves over a million users in 10 different countries.

Hartz is the CEO of the company and is responsible for its growth and strategy. Under her leadership, Eventbrite has not only become a successful company but one of the best to work for in the US.

Eventbrite has won numerous awards for its workplace culture. This includes:

-Fortune’s 100 Best Workplaces in the US

Naomi Hirabayashi and Marah Lidey launched the self-care app Shine to disrupt the wellness industry. On the Shine site it reads:

“We started Shine because we didn’t see ourselves—a Black woman and a half-Japanese woman—and our experiences represented in mainstream ‘wellness.’Our bodies, our skin color, our financial access, our past traumas—it all often felt otherized.”

With Shine, users get a new self-care strategy every day. They also have access to a self-care and soothing sound library with more than 800 calming bedtime stories, meditations, and soundscapes.

The app also offers a paid premium tier which offers self-care courses, personalized support, and access to a virtual community.

The team behind Shine is unique, as it is 80% BIPOC. This is almost unheard of in the tech industry. According to their site:

We’re driven by our individual values and passions. As a team that’s 80% BIPOC, we’re proud of the diverse range of experiences, identities, and skills we all bring to this company.

While at Harvard Business School, Tan Hooi Ling co-founded what would become one of Southeast Asia’s biggest ride-hailing apps. Ling and Co-founder Anthony Tan entered a startup competition under the name GrabTaxi and won.

GrabTaxi has since rebranded to Grab, earned over a billion in funding from investors including SoftBank, and now offers a wide range of services.

It is similar to other super apps of Asia, which offer a wide variety of services through only one platform. You can use Grab to order food, hail rides, and have groceries delivered, similar to Uber. However, you can also use it to do things like bank, invest, purchase insurance, and send mail.

After spending 15 years working as a foreign correspondent, Maggie Palmer decided to take on the gender pay gap with the app PepTalkHer.

As we have already touched on, there are significant systemic issues that women face in the tech industry. Unfortunately, this extends across every industry.

According to the Pew Research Center, in general, Women in the US earned about 15% less than men do for the same work in 2020.

However, this is not a complete picture, as ethnicity plays are large role in the US.

PepTalkHer is an app that helps women track their work successes in order to build their confidence, so they are prepared to negotiate raises.

Of course, this app cannot undo systemic problems on its own. However, so far it has helped hundreds of women negotiate for better pay. It even helped one woman get an $83,000 raise.

Women have always played an important role in the development of tech and the industry as a whole. Despite this, they face significant barriers in getting hired, getting funding,and being recognized for their accomplishments.

Even the most famous female founder in the world, Whitney Wolfe Herd, who we have covered on the blog before, was inspired to create Bumble due to her past experiences of gender discrimination and harassment personally and in the industry.

It is amazingly impressive that these women have built influential apps and grown thriving companies in such conditions.

Have you tried out any of these apps? What did you think? Comment below.

An Exciting Look At Women-Founded Startups and Apps

Careem: The First Super App In The Middle East